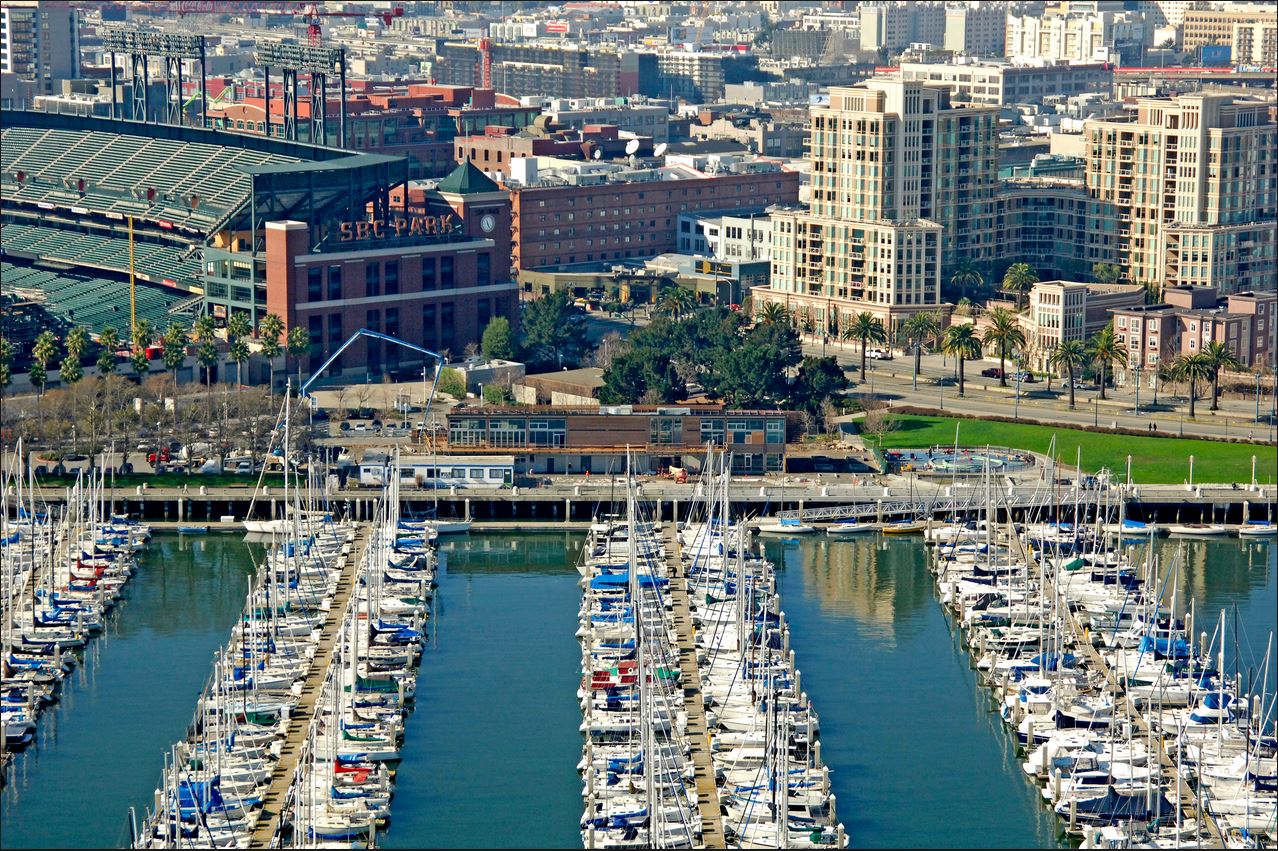 Who knew summer sailing in San Francisco could be so warm? Even our bowman wore shorts and a T-shirt for two days of sailing hosted by South Beach Yacht Club. What stands out for me after a weekend of sailing south of the Bay Bridge was how different this venue was from the fleet’s usual spots. And for what my vote is worth, I hope we come back for an event next year.

Difference number 1: The wind fills in late. At least it did this weekend. On Saturday morning, the fleet went out to a hot and windless race course. We saw wind out in the central bay, but we didn’t know when it would make its way to us. As a result, we spent the early afternoon floating and enjoying the scenery. For those of you who haven’t spent a sunny few hours between San Francisco and Alameda, the panorama from the new Warriors stadium through Oracle Park, the San Francisco skyline, both parts of the Bay Bridge, and Treasure Island is really quite pretty. And it turns out that the weather can be nice enough to sit back and enjoy it. Which brings us to…

Difference number 2: It was hot and sunny. In fact, it was perfect weather to lie down and take a nice nap on the deck. We sail in sunny weather often enough, but even in the sun it’s usually still cold. For those of you who missed the event this year, remember your sunblock when we come back. Remember that on those rare days you don’t wear spray pants you’ll need to keep your legs from burning. I bet our boat was not the only one to forget that.

Difference number 3: The current. There are strong currents everywhere on the bay, and each location has its own character. Sailing out of South Beach, the current runs across the course in a westerly. For this event, we were in two knots of flood both days. The race committee was fully prepared. They set a starboard rounding at the weather mark, and set very long offset leg to square the run. The fleet, on the other hand, took a race or two to figure it out. Most of us overstood the first weather mark due to the current. Godot, notably, nailed the layline call and ran away with the race one.

Difference number 4: Even when the breeze filled in, it was still warm. If it’s not clear, I enjoy good weather. During the second and third races Saturday, the breeze built to the high teens. However, since we weren’t sailing in a fog bank, it was still nicely warm out. We were reaching for sunblock rather than spray gear. Both up and downwind there were opportunities to gain and lose boats. Both sides of the course could work depending on where there was better pressure and direction at that moment.

Difference number 5: Shifts and puffs. The South Beach race course is downwind of San Francisco. At the top of the course, you need to look out for wind shadows behind ships and warehouses, puffs coming out of McCovey Cove, and shifts as the breeze weaves between the buildings. A lot could change in the last quarter of the beat, and often enough it did. You had to keep an eye out for that final shift or gust that would mean beating or losing a handful of boats. Downwind it was easy to be on the wrong gybe or overstand the gates. This course rewarded the teams who kept their eyes out of the boat.

Difference number 6: South Beach Yacht Club. Like sailing out of St. Francis, the South Beach is a very short sail from the race course. After racing it was easy to pull into our slip and head up to the club. Like SFYC, there is a beautiful deck to socialize on after sailing. The atmosphere was very comfortable for relaxing with the other sailors after a delightful day of sailing.

Sunday the wind was lighter and shiftier, but still great sailing. We squeezed off another three competitive races. Thank you to the race committee team led by Jeff Zarwell. You did a fantastic job all weekend. Thank you South Beach for hosting such a fun event. We had a blast, and can’t wait to sail with you again.

See you all on the water,
Ben Pedrick, on behalf of the entire Jam Session team