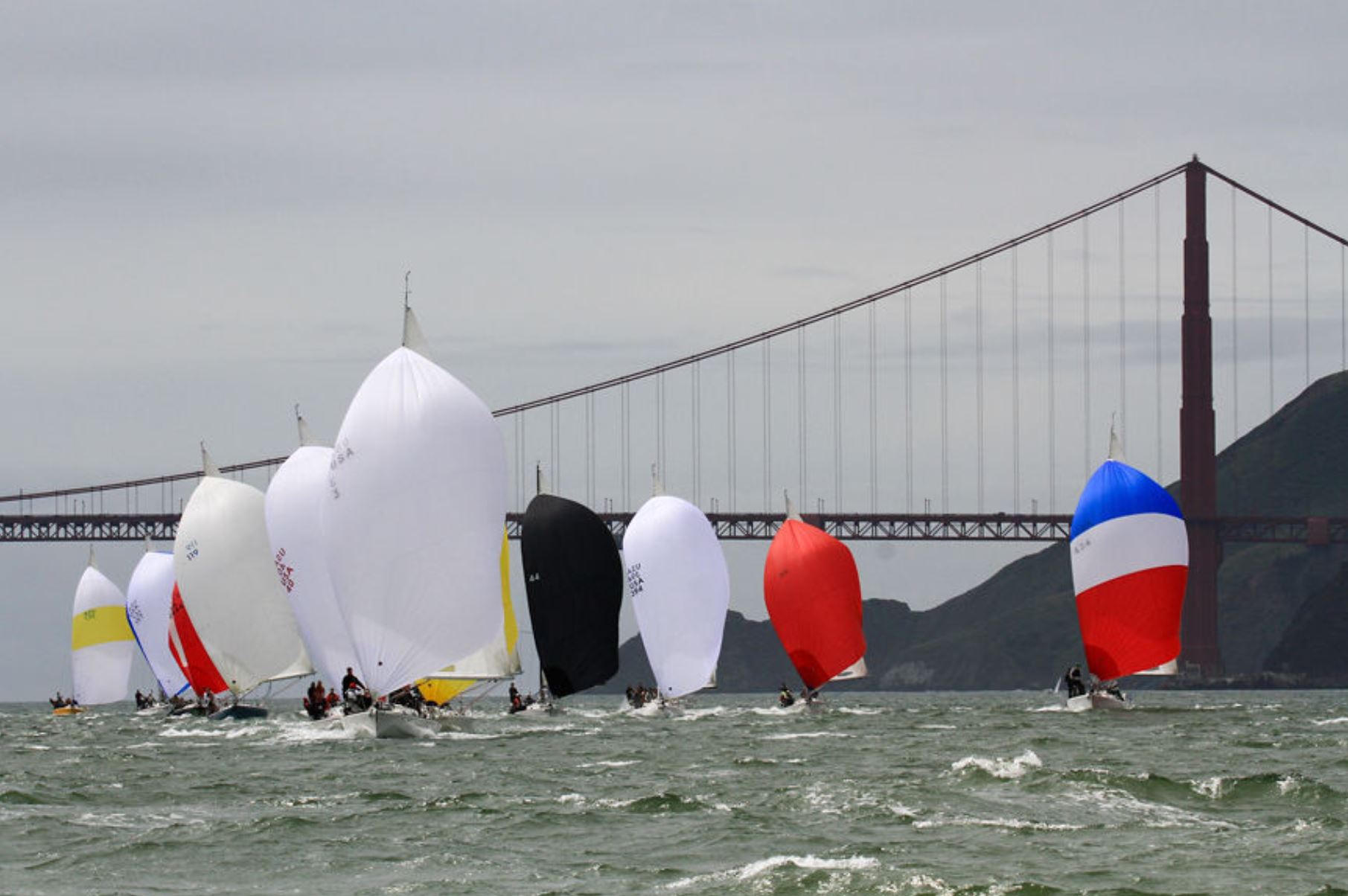 On Saturday morning it looked like the J/Fest was a repeat of the Spring One Design. Light winds, lots of current (albeit flood) and postponements. Fortunately on both days, the wind eventually filled in and six races were completed in 14-20 knots of breeze, but not without drama that typically comes with any J/105 event.

As it seems to always be when racing in the main bay in spring, it is always favored to be the first to one side of the course and the J/Fest was no exception.

Consistently, the top boats were the ones that started at or near the pin and were able to hold their lane to get left to the relief off the city front.  Visa versa on the run, big gainers were had jibing early to get left to get into the flood that was still pushing down the middle of the bay.

In race one, Russian Roulette played both legs perfectly and held off Black Hawk for their first win of the season.

For the second and third race, winds increased to the upper end of the range and went a little right. But the left side was still favored and Ne*Ne took both races leading wire to wire after nailing two pin end starts.

At the end of day one, the top three boats were Ne*Ne with 10 points, Black Hawk with 14 points, and Jam Session with 16 points.

Sunday brought lighter breeze so at the scheduled 11:30 start the “cat and the hat” flag was displayed instead of the class flag. The race committee lowered the postponement soon after, in what some competitors called an “anxious attempt” to get a race in. The 5 knots of breeze wouldn’t have been a problem except for the three knots of flood. The boats that got left and intentionally over stood looked really good a first, but they had to cross the flood into the main channel to round the weather mark. They soon realized they would need to tack again, and again and again, just to get around the weather mark. Then again, again, and again to round the offset. Some were better at this than others especially Godot who won their first race of the season.

Fortunately by race two, winds picked up to the mid-teens. The race committee resorted to the U flag in an attempt to stop general recalls. A couple of boats got UFD’d (U flag penalty). Everything else would have been fine except a rather large log, no, more like a telephone pole, decided to get a closer look at the action and completely shut the door on the boats choosing to start at the pin. This stopped the sequence until the race committee was able to clear the invader and get the race off.  Box of Rain won the start and went on to win their first race of the season.

Some boats, including Ne*Ne (who had assumed they won the regatta) thought the sailing was done for the day and headed for the barn. But it was only 3:40 and the race committee knew they still had twenty minutes to squeak in a start before the 4:00 o’clock deadline.  Ne*Ne noticed just in time that a race was going to start. They turned and motored back toward the line until the prep signal. With four minutes to go, they quickly set a kite but it looked to be too late. Luckily a puff came through and with 90 seconds to go, they jibed in a desperate attempt to exit the triangle created by the U flag flying. With just eight seconds to spare, they manage to clear the triangle do a Mexican drop around the committee boat, and line up for the start.  Donkey Jack took the final race but Ne*Ne took third to win the regatta by five points.

The lopsided course the last two regattas has many questioning the wisdom of racing in the main part of the bay in the spring because of the strong currents. I’m on the fence. One thing for certain, it appeared nobody wanted to win this regatta. The scores were all over place and we saw two boats win their first A series race ever (Box of Rain and Russian Roulette). That was nice to see! In fact, we had five different boats win races! It doesn’t get much better than that!

Maybe racing in the main bay in spring mixes it up a little, and adds a different element? This discussion will long be forgotten as we settle in to the rest of the schedule and the more predictable sailing in the summer and on the Berkeley circle.

See you in May.