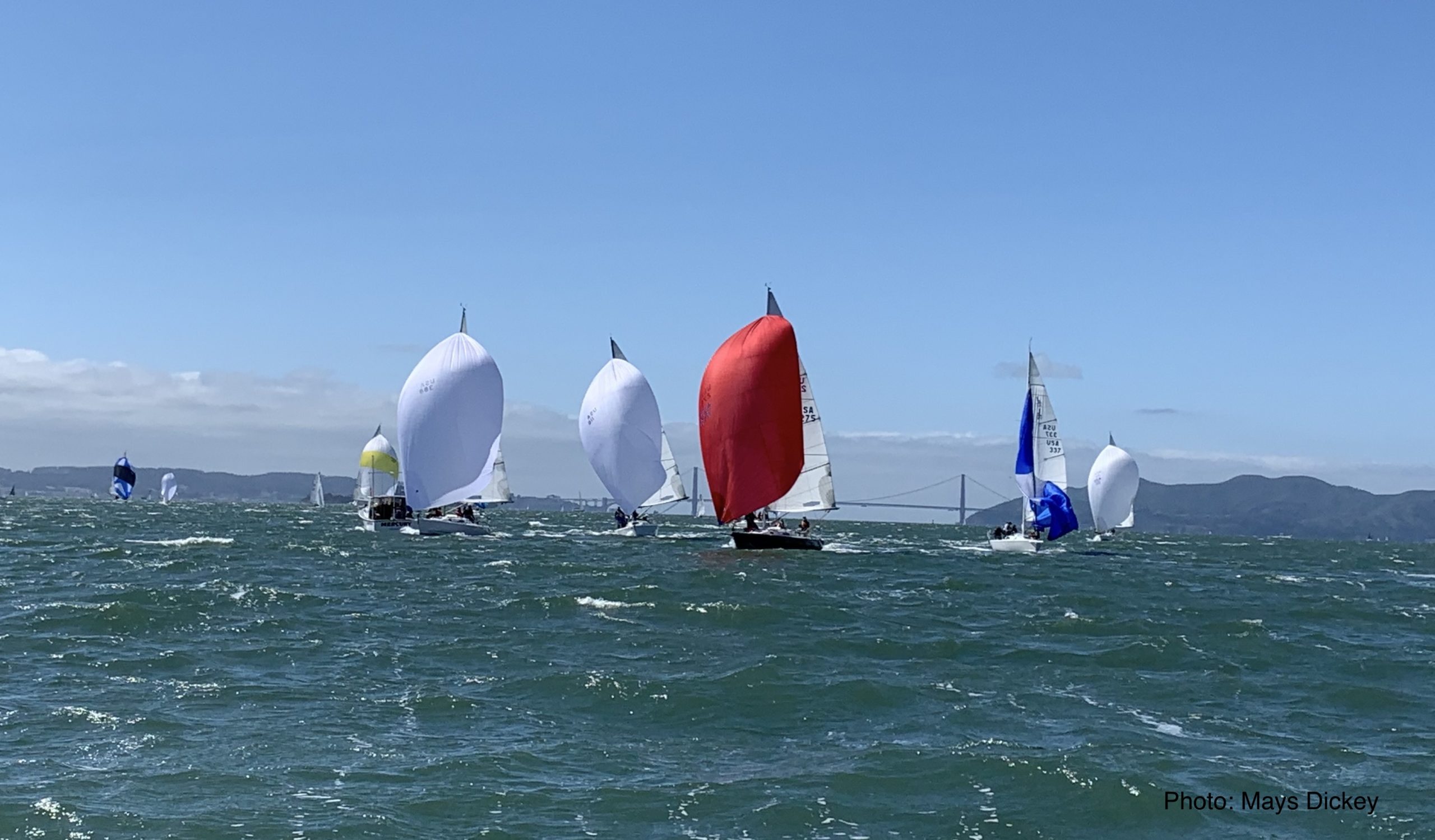 Playing With A Loaded Gun
By Ian Charles, Fleet Captain

The Regatta Pro Mid-Winter One Design Series wrapped up its final weekend under sunny skies, brisk temps, and strong breeze. With over 20 boats seeking overall honors in the series, the top contenders came prepared to do battle and left it all on the water.

The 8 race series on the Berkeley Circle brought a wide variety of conditions from super light & shifty and complex currents to breeze-on and big ebb chop.

The final day of the series started with a brief postponement, but the breeze soon filled in from the west and quickly hit 14-15 knots before the first gun. After a tight start, Russian Roulette rounded the top mark first with MAVERICK & NeNe close at their heels. As the breeze freshened on the two-lap windward-leeward course, the top boats’ battle continued with Jam Session joining in the mix, but at the finish line, it was Russian Roulette who took the photo finish win over NeNe with MAVERICK coming in a close third.

The excitement continued in race two–if you thought the game of Russian Roulette is played with one bullet in the gun, think again. Once again, the top boats at the windward mark were the trio of Roulette, NeNe and MAVERICK. While the top group appeared to distance themselves from the rest of the fleet, it was tight sailing throughout with multiple close finishes at the line. In the end, we learned that Russian Roulette was now being played with two bullets as they took their second consecutive race win in race 2. NeNe and MAVERICK rounded out the top 3 with Bruce Stone and Nicole Breault in fourth.

With the breeze now building into the low 20’s, a couple of participants called it a day, and some will be calling their sailmakers in the days and weeks ahead. It wouldn’t be J/105 racing without at least one general recall. The fleet stayed true to form as the building ebb and rising adrenaline levels pushed most of the boats over the line before the gun in race three. After a successful start under the Z flag and a ripping ebb, it was a game of tight crosses and calling lay lines at both ends of the course. The big breeze and choppy conditions made for some great downwind blasts and emphasized precise boat handling. We did see Russian Roulette try and build the picket fence, but they didn’t have a third bullet in the chamber. NeNe took the the win for the race and the overall series victory with MAVERICK in second and Russian Roulette in 3rd for the race and regatta.

Congratulations and thank you to all who participated. A special thank you to Jeff Zarwell for producing a great event (8 races in 3 days of racing) with a thin staff of volunteers and some uncertain conditions along the way. Thank you!

We are all looking forward to seeing you on the water next weekend for the Fleet 1 Season Opener at the Sausalito Yacht Club. The J/Go regatta will happen on March 20 & 21 and is a season counter for the annual fleet rankings.