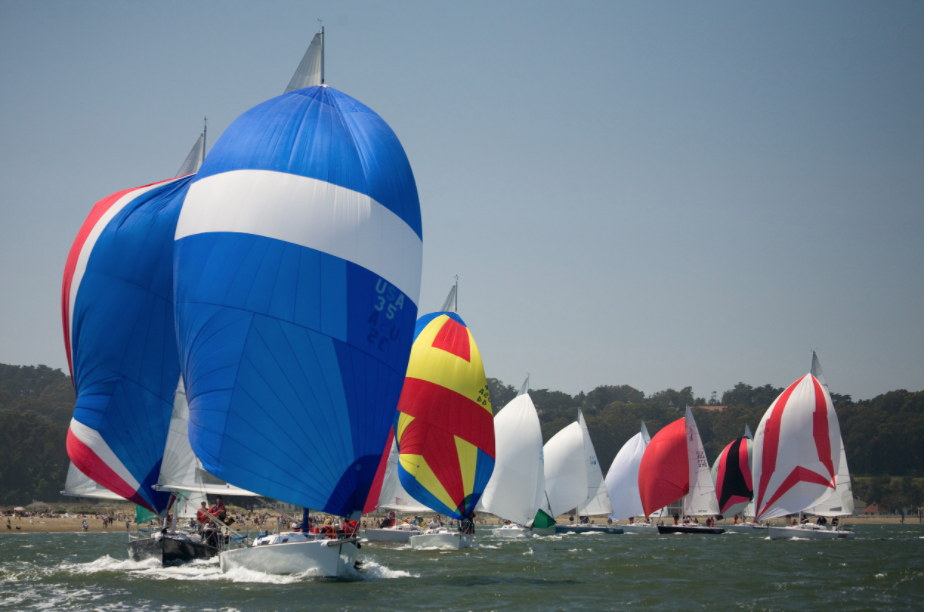 The 2nd day of the RegattaPro Midwinters series hosted by PRO Jeff Zarwell & the Sausalito Yacht Club took place under picture-perfect conditions yesterday. Fifteen J/105s hit the line in a dying flood tide on the Berkeley Circle. After three more races, the top of the leaderboard has tightened dramatically, and the series will be decided in the final installment on March 13.

With a throwaway now in the mix, Tim Russell and his team on Ne*Ne are now tied with Bruce Stone & Nicole Breault on Arbitrage with 7 points for the series, followed closely by Ian Charles’ Maverick with 9 points to round out the podium. Each of the top three boats had a bullet on the day.

Eric Patterson & Steve Prince’s Kestrel moved up to 4th place after a strong showing on the day, and Bill Woodruff’s Russian Roulette moved up the line to fifth place with a 2nd in Race 5.

Conditions changed dramatically as the day went on, and competitors who were able to shift gears and adapt their strategies to developments on the water were rewarded. Forecasts for the day were all over the map, and at first gun, things looked bleak with only 3.5 knots of breeze. But, as if on cue, at 1100, the wind filled from the north to around 8-10 knots and the Race Committee hoisted the class flag right on time.

Race 1 generally saw current relief inside on the right side of the course, but the recent rains created some massive back eddies, so keen observation & lane choice were paramount to success. Passing lanes abounded for those who could seize the moment.

The northerly didn’t stick around long, and by the start of Race 2, the westerly had established its dominance, building to almost summer-like conditions. But, this wasn’t a July day on the bay as the breeze was quite puffy. Aboard Maverick we saw puffs to 22 and lulls down to 12, meaning gear-shifting was vital.

Race 3 saw similar conditions with the ebb tide being generally stronger on the left, but the wind was oscillating dramatically, so clean lanes & hitting your shifts were key.

After the middle two days of the event were postponed due to COVID, the final installment will take place on March 13. It’s not too late to sign up & join us!