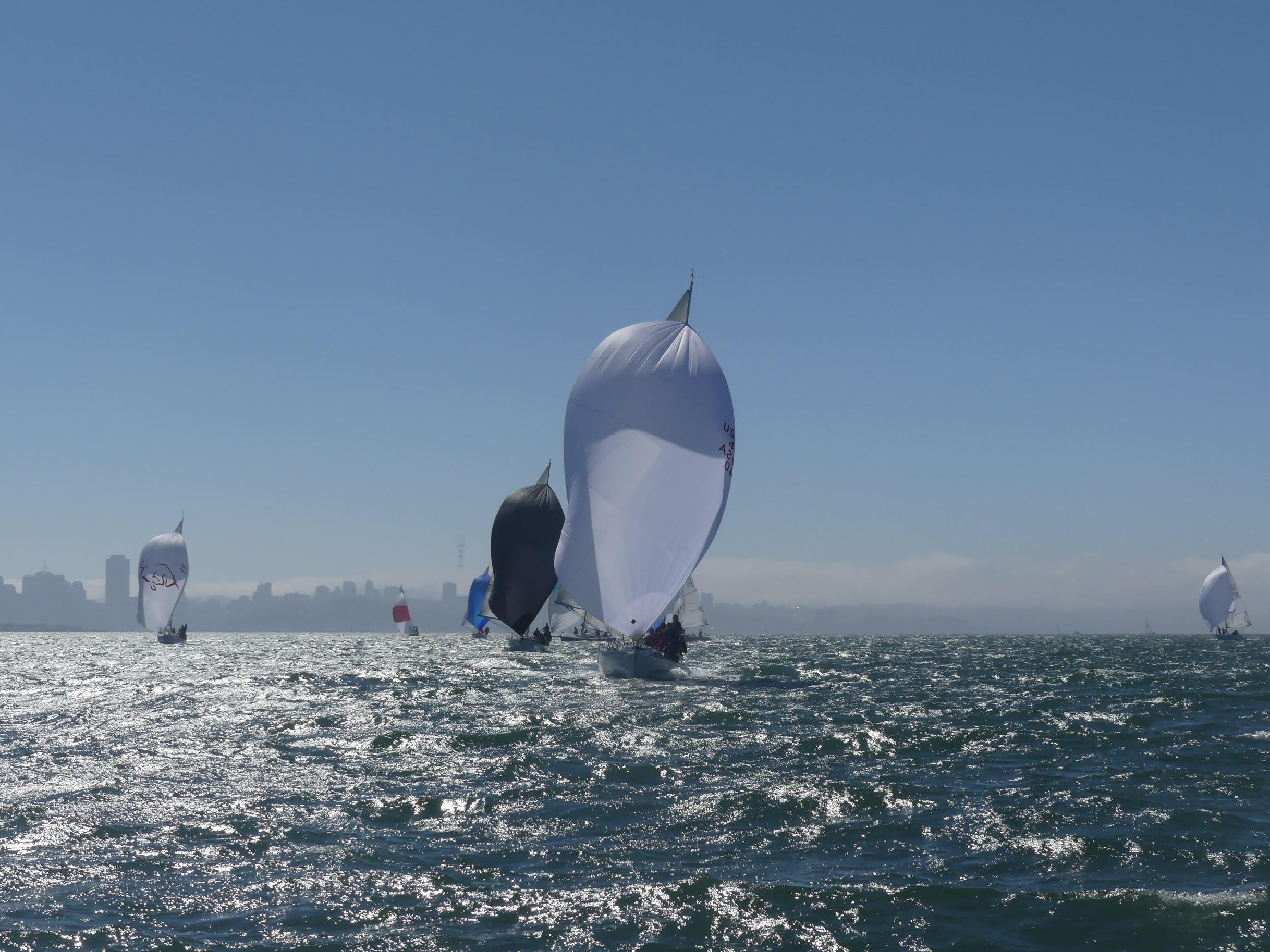 Apropos for this crazy year, weekend two of the COVID Series threw everything at us, and it was a battle of attrition. Not giving up at times was tough. Getting clean(er) air to go sailing was a gift as it had looked like a potential smoke out once again the day before. However, all the aggressive starts and a dragging committee boat on Saturday kept us grounded to the angry mob vibe of 2020 with echoes of a Portland siege.

The wind followed the models fairly well and we had a really good late season blow on Saturday. We brought out our AP jib and left our heavy on the dock. That turned out to be a mistake and we were suffering later in the day when the wind topped 20. Fortunately, Sunday racing backed away from apocalyptic and returned to normal racing on the bay.  We had our heavy jib for the second day and wound the rig up in the 18 kts sailing to the start, then adjusted as the wind backed off.

With practice starts and recalls, rumbling off the starting line was a theme of the weekend. Starting on Saturday was a challenge for sure. We would ping the boat end and see it was pretty heavily favored, but then see it shift to a pin favor before the time ran out. We may have been the first to realize that the committee was dragging and started to guess by how much. Eventually we just started at the stable pin.  It was a good solution for us that fit with our evolving strategy to play the left side of the course after learning a hard lesson in race one.

The entire fleet was tight and a late port cross at the top mark was a winner if you made it. If you didn’t, you had a 7-boat starboard-tack wall to pick through! Arbitrage showed us this when they tacked under our lee bow, forcing us to the right in the first race and then to watch them lead the fleet around mark one and sail on for the win. Note taken.

We controlled the left on the second race to have the wind shift permanently left and skew the downwind run. The race lost any passing lanes and Jeff Thorpe kept us entertained on the radio trying to find a way to fix it.

Unfortunately, the repositioning of the marks for race three didn’t hold, causing the leaders some significant confusion. Ian figured out that a drifting top mark doesn’t necessarily kill a race since you have a valid offset that you have to get around as well, but the call was made to cancel and resume racing in the morning.

The first race on Sunday was definitely our favorite. The fleet again was tight, and it felt like any of 4 boats were in the lead at any given moment. Again, the left shift at the top of the course was a gainer.  We had roundings where the consistent left shift moved us from 4th to 1st around the mark in the last 100 yards. Once we figured out that part of the puzzle, we protected the left and hit anyone who tried to swap sides, forcing them back to the right.  Sorry Maverick.

The top of the leaderboard came down to the last race, and of course, we kicked it off with our weakest start of the weekend. Fortunately, we also sailed our luckiest race, cashing in all of our karma for the year! We pulled the trigger too soon and ate up our hole above Jabberwocky. This put us in a slow trapped position, with NeNe and Box of Rain above us. We were not going to live there long, but with Aquavit also trailing Box our escape was blocked by too big a tack and duck. We had to stand on for a few painful minutes. The lee bow from Jabberwocky was made even more painful with a left shift and we finally got out, tacking just after Aquavit and ducking Box of Rain.  That made us the South boat of the North pack.

We immediately got a bigger port tack lift and moved into the lead of the North group.  I was praying for any right shift to be able to get South with the leaders and cut their leverage to stop the bleeding. We also started to apologize to the rail for how hard they were going to have to hike to get us back into the race. Instead of a right shift to get us back in the mix, we had the biggest left of the day to 215.  When I finally got eyes on the top mark, we were almost lifted to it with the South fleet well overstood. I wish I could take credit for a leg of brilliance but we were really forced into a perfect position and didn’t mess it up by tacking away from the port lift. We chose to focus on boat speed instead to win the side we were on. Fellow Blackhawk crew, Jonathan Rosen, summed up the rest of the race, “When we were the first boat to the round the mark, we made an offering to the gods of luck, and focused on sailing a clean race and trying not to give up our lead with an unforced error.”

We are looking forward to this coming weekend. We hope to muster the never give up, never surrender feeling again, have good starts, figure out the wind and current puzzle, and most of all sail fast. We’ll see how much sailing karma is left in the bank!