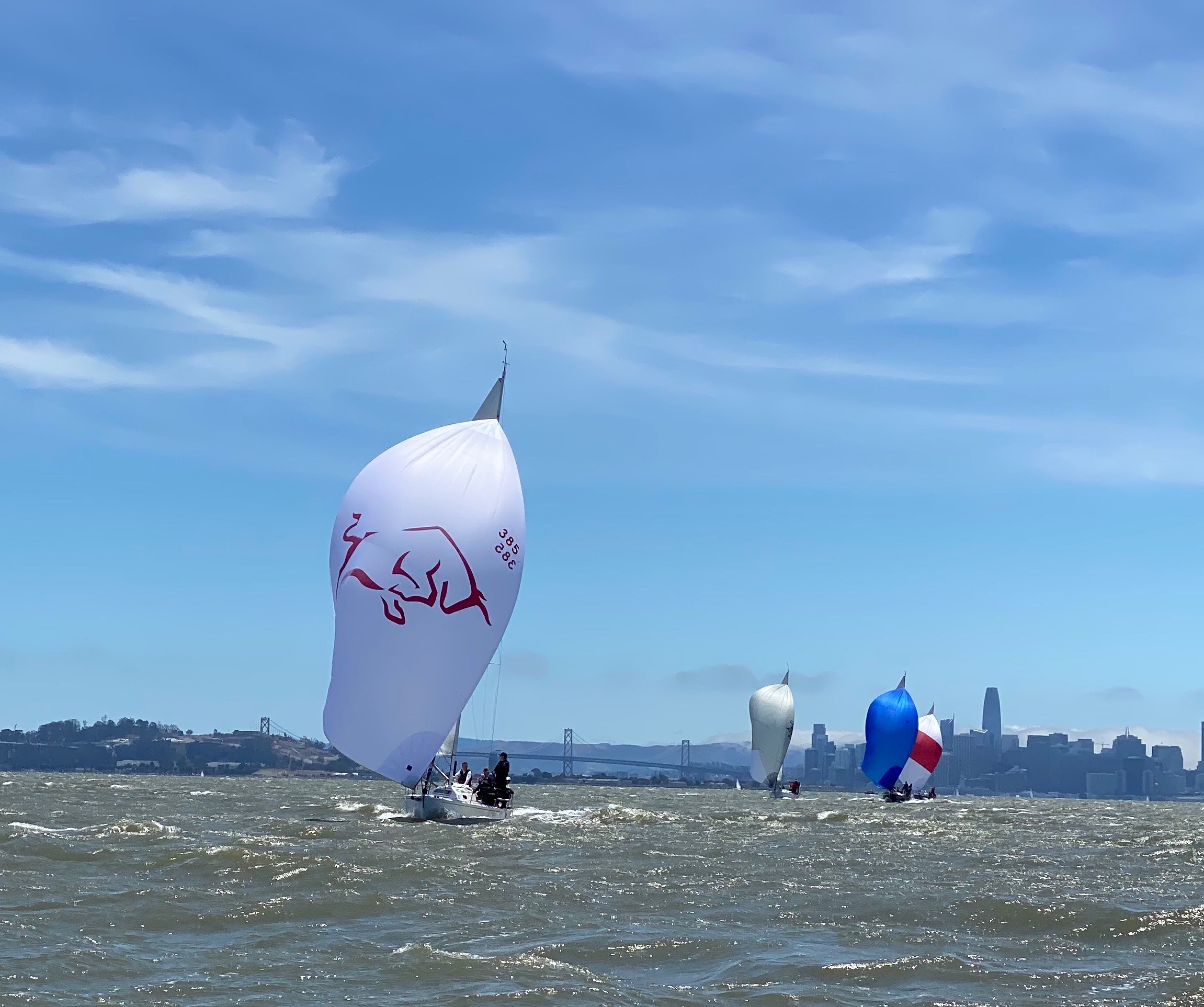 The air was smokin’ and so was Mav! On August 22-23, J/105 Fleet #1 rendezvoused on the Berkeley Circle for the first of three 6-race weekend regattas dubbed the 2020 J/105 COVID Series. Ian Charles did a lot to inspire and organize the series, and now he and his team took the opportunity to kick off the racing by showing us how it’s done! Here’s his take on the weekend’s action:

What a great weekend of racing.

Saturday started out with 12-15 knots that built into the high teens and low twenties by the second race.  We saw 20-22 knots in race 3 and gusts up to 23-24.  Wind was 215 to 220 with not a lot of shifts, but an increasing flood tide called for careful lay line planning.  We saw tight racing up at the front but the big gainers were made after the windward mark. We saw driving conditions change from flat to lumpy which brought with it some adjustments to trimming and apparent wind angles.

The picket fence on Saturday was a first for me.  I’ve taken two bullets in a row but never three. This was especially sweet when we added a fourth consecutive bullet in race 1 on Sunday!  I think the secret to our success is the scrimp construction of our boat.  It adds a certain something that made it difficult for the pre-scrimp boats to keep pace with us (;-}). All kidding aside, it was a dominant day for us and our crew work really shined.  Our tactician, John Oldham, was in the groove on every call, and hoists, douses, tacks and gybes were tight and right.

Sunday was more of a dog fight in races 2 & 3 with bogies like fire flies all over the sky.  NeNe got the jump on us in race 2 and while we ground them down, they had half a boat length on us at the finish.  Sunday’s race 3 saw us break right on the first beat after a less than stellar start, and when a 208 shift came through we were hung out to dry.  Rounding 5th or 6th we battled back and passed NeNe with a wing on wing approach into the leeward gate.  On the last leg into the finish, Nene tried for a tight lee bow maneuver which was her only move at that point.  Unfortunately, Arbitrage took a windward position to Maverick which forced us to tack away for clean air.  Coming back on starboard as we approached the pin end of the finish line, we shut the door on NeNe – though they still tried to stuff it in on port with no rights. We topped the day with a 1, 2, 3, taking 4 of 6 bullets and total of 9 point across the 6 races.

I am very excited that we came together as a fleet to produce this event.  It certainly wasn’t easy. Having the luxury of two Protectors, a very experienced PRO in Don Wieneke, great course management and coaching with Jeff Thorpe, and great volunteers made it all possible.  I can say with certainly that I will never take an NOR or set of SIs for granted again.  They take an enormous amount of effort and careful consideration to get them right. We have 17 boats signed up for the series so far and will likely have 20+ boats in the next two events. My protector took a little damage but boats can be fixed.

All in all, a great weekend of racing at a time when our entire season has been cancelled due to Covid.  Looking forward to seeing everyone out there again in September.