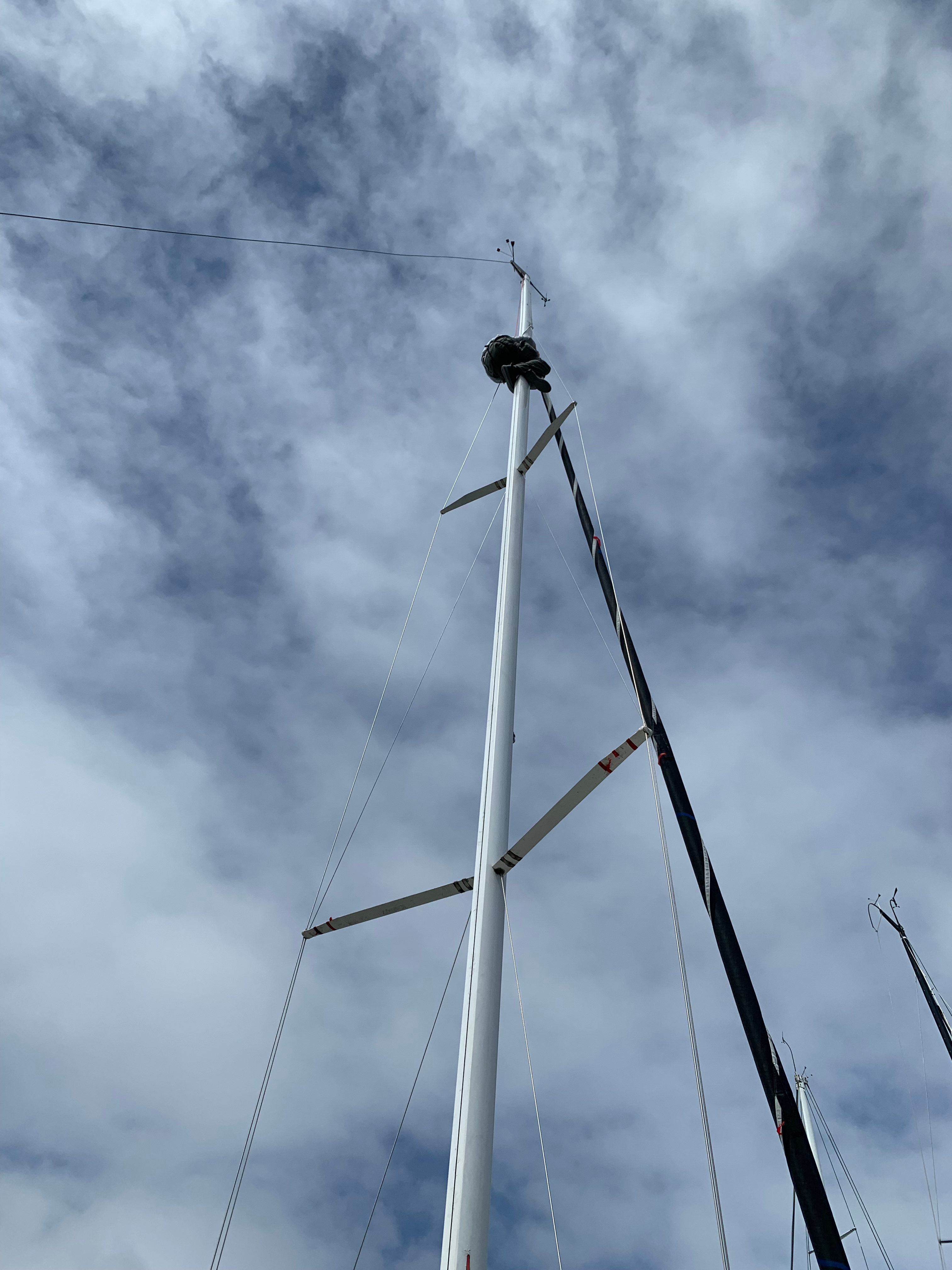 Racing at the St. Francis Yacht Club came roaring back to life this past weekend with the 2021 Springfest Regatta. It’s been more than a year and a half since Fleet 1 hit the city front en masse, and weather conditions didn’t disappoint. Twenty teams brought their A-game to face a strong ebb and solid 15-20 knots of breeze for the two-day 6 race series on May 22nd & 23rd.

Ian Charles and Team MAVERICK drew first blood with a bullet in race 1, followed by a 2nd & 4th place to lead the series after the first day by 1 point over Tim Russell on Ne*Ne. The real story of the day was the heroic port tack start by Ryan Simmons and the Blackhawk crew in race 3. The perfect start at the pin resulted in a horizon job and a bullet to end the first day of racing.

Asked about the brilliant start, Simmons said, “We had been watching the wind shift 30 degrees at the start all day and knew it was a matter of timing. The right had paid huge the last three upwind legs, so the fleet jockeyed for the boat, which left 3 of us fighting for the pin. Godot and Arbitrage were clearly going all-in on port tacking the fleet, but we had positioning and were able to ambush them on starboard at the pin as the gun went off. That move forced two huge ducks and allowed us to start at full speed and layup inside the whole fleet on a huge left shift. From there, it was a drag race to lay line. Clear air is king in this fleet.”

Even more impressive was the return of Phillip Laby and his Godot crew after an almost 18-month hiatus. Godot was dismasted in the 2019 Rolex Big Boat Series, and this was their first A regatta with the new mast. It didn’t take long for this previous 2016 Season and Rolex Big Boat champion to shake off the salt and make his presence known at the top of the fleet with 1st and 2nd place finishes in races 2 & 3.

The fleet headed into Sunday with similar sunny, breezy, and ebb conditions, which made for tough layline calls and tight and precise gybing down the city front. The 20-boat fleet picked their angles carefully, with the rocks on one side and starboard gybe boats on the other. Phillip Laby on Godot continued where he left off on Saturday with a bullet in Race 4 after an impressive pin end start and 2nd in Race 5. Ryan Simmons on Blackhawk wasn’t about to lie down either and produced another bullet in race 5. With one race to go, any of the top 5 boats were in a position to win the regatta, so it all came down to the last race.

Tim Russell on Ne*Ne battled it out with Ian Charles and team MAVERICK with close tacking and gybing duels on each of the 4 legs on the 2 lap windward-leeward course. Neither boat was giving anything away with slam-dunk tacks and tactical deployments of the wing-on-wing maneuver downwind. The overlapped finish saw Ne*Ne take the bullet and the regatta win with MAVERICK in second. MAVERICK tied on points with Godot, but Phillip Laby’s 2 bullets vs. 1 for MAVERICK in the series broke the tie. Welcome back Godot!

“Who ordered the Samurai Douse?”

Elsewhere in the fleet, Charlie Pick & his crew on Box of Rain spent the weekend identifying weakened gear after a year of COVID. On Saturday, their main fine-trim control decided it was going on strike & ripped itself completely off its pedestal. After some quick jury-rigging, the race was back on, at least until the spinnaker halyard cover rudely parted itself from the well-meaning core during the last race. Thus, it was time for the dreaded Samurai Douse.

Luckily, this was the least traumatic samurai douse that has ever occurred on the bay. The kite came down gently, new parts are in the works, and the Box will live to sail another day. The MFO Charlie is presently seeking volunteers to go up the stick. A kangaroo court to identify the crew member who ordered the samurai douse will take place later this week. All signs point to the bowman.

Special mention goes to Bruce Stone and Nicole Breault on Arbitrage for abandoning their efforts in race 3 to pick up a sailor from another J/105 who had fallen overboard. This was a true example of the Corinthian spirit that exists in this class.

Arbitrage was awarded redress and a 2nd place finish in race 3 for their efforts to keep a bad situation from turning worse. Thank you, Bruce Stone and Nicole Breault.

Next on the calendar for the season is SFYC’s June Big Fleet Invitational to be held on the Berkeley Circle on June 12-13. See you there!