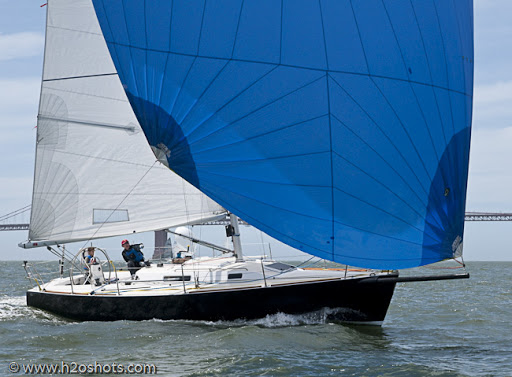 On National Bittersweet Chocolate Day – Sunday, Jan 10 – nine J/105s gathered informally near Golden Gate YC’s X buoy in what has become a monthly rally to get some fresh air and double-handed sailing, and earn the prizes of Bruce’s bittersweet chocolate brownies.  With a 4-7 kt northeasterly and a few knots of ebb, expected to build significantly, several skippers wondered whether we could even make it around the course.  Actually, an hour before the start, the current was strongly flooding INSIDE SF Marina’s West Harbor driving Bruce Stone’s J/105 Arbitrage sideways into the corner of the guest dock, earning a severe scrape of the hull.  After Co-owner (and spouse) Nicole Breault applied a healthy amount of duct tape, the team headed out to the starting area.

With the wind starting to clock north just before the start, and the windward mark being YRA 8 (channel marker R “4”), most boats started at the wind-favored X buoy, while Akula, skippered by Doug Bailey, started on port at the Wave Organ, the shoreside end of the line, in less adverse current.  Akula headed along the shore all the way to Pier 39, and looked way behind, especially when the wind shifted further north and both Ne*Ne and Arbitrage were able to set their spinnakers while still on the first leg.  With most of the fleet gaining current relief by passing Alcatraz to the north, Akula seemed to be a mile behind.  The northerly then ramped up to 12 kts and the “leaders” were sailing on a tight spinnaker reach, barely under control since they were missing 800 pounds of crew!  All of a sudden, Akula poked out into the ebb exiting from South Bay and achieved a massive VMG as he headed north toward the mark, arriving there a half-mile ahead of Ne*Ne, Russian Roulette, Arrived! and Arbitrage rounding together in that order.  Akula then headed southwest (with the westward flowing ebb) in a fast close jib reach to Blackaller, and the next four boats traded places behind her.  It was quite tactical as Ne*Ne and Russian Roulette sailed high so they could reset their spinnakers, while Arbitrage sailed low with the jib barber-hauled to the rail and Arrived split the difference.  Approaching Blackaller for the final rounding to finish at Golden Gate YC, Arbitrage moved up to third by passing Roulette and Arrived!, while Ne*Ne held on for second behind Akula in first.

“The J105 BitterSweet Double-Handed Race: aka: Reach-around with Bruce:

Racing on The Bay in winter is always a crap-shoot with respect to the wind. Sometimes it shows up, and sometimes it doesn’t. The forecast for Sunday did not look promising, with a high level Northerly flow in relatively stable air, leading to predictions of just 5kts max across the race course. Couple that with a vicious ebb, and I was in half a mind to stay home, cook brownies for myself, settle down on the couch and watch the wildcard games in comfort. There’s nothing worse than hanging out at the Wave Organ for 2 hours in just enough wind to get to it, but not enough to poke your nose out into the current and pass it. Been there, done that. As this was an informal race, Bruce communicated the course – X (start) to Red 4 to Blackaller to X (finish); my crew Roberto Giramonti and I discussed our options.

As luck would have it, we were blessed with 4 kts wind at 11:00 AM and what looked like better air out in the central part of the bay. However, I was not sure that there was enough breeze to overcome the central bay ebb and I was particularly concerned about the wind shadow of Angel Island because of the northerly component. I wanted to try to get our nose out into the long fetch down the bay quickly to avoid parking or worse, getting washed backwards to Harding and beyond. We decided to take the long way around and hide from the ebb along the city front, before making the call to cross the (stronger, but shorter distance) ebb flow to relief at the back of TI.

Surprisingly, no-one came with us, and by the time we figured that out, there was no way to get to the boats that were already well out into the wind line – we were stuck with our plan. It did not look good for a while as we made 0.1 kts SOG past Ft. Mason. The breeze in there was very light – I speculate that it was coming undisturbed at 4kts or less down the bay and the laminar flow was lifting up over the land leaving us with just zephyrs to use to make progress in the more or less slack water behind Aquatic Park. What kept us motivated was the flags flying strongly on Pier 39 – we were pretty sure that if we could make it past the ebb on the marina wall and into the next section of relief, we would be in good shape.

The money decision was when to head out into the current and go for the mark. It was already easily “fetchable” in the absence of current and so the decision rested on the relative strengths of the wind and current on the run up to Red 4. In the end it was clear that we stayed on the cityfront too long – we never had to go above 40 degrees apparent on what turned into a fast white sail reach past Blossom and Red 2. We saw the central bay fleet coming fast carrying kites (and staysails in some cases) at fine angles, but we were pretty sure that we would get to Red 4 with plenty of gap, which is what happened. At that point it was simply a matter of covering the fleet on the way back out to Blackaller and home to X. We had a kite ready to go and we were watching to see if anyone took a flyer south of Alcatraz, but no-one did and we felt that the guys that did launch would not be able to catch us. We elected to keep it simple and reduce the risk of a mistake by holding our kite in its bag. We won with a few minutes to spare, followed by Ne*Ne, Arbitrage and Arrived!

Bruce handed over our prize – the eponymous Bittersweet Brownies, much better than I would have made if I’d stayed home. A delicious, but nerve-wracking and somewhat lonely, day on the Bay.”

Next double-handed rally for the fleet will be on Valentine’s, Feb 14.