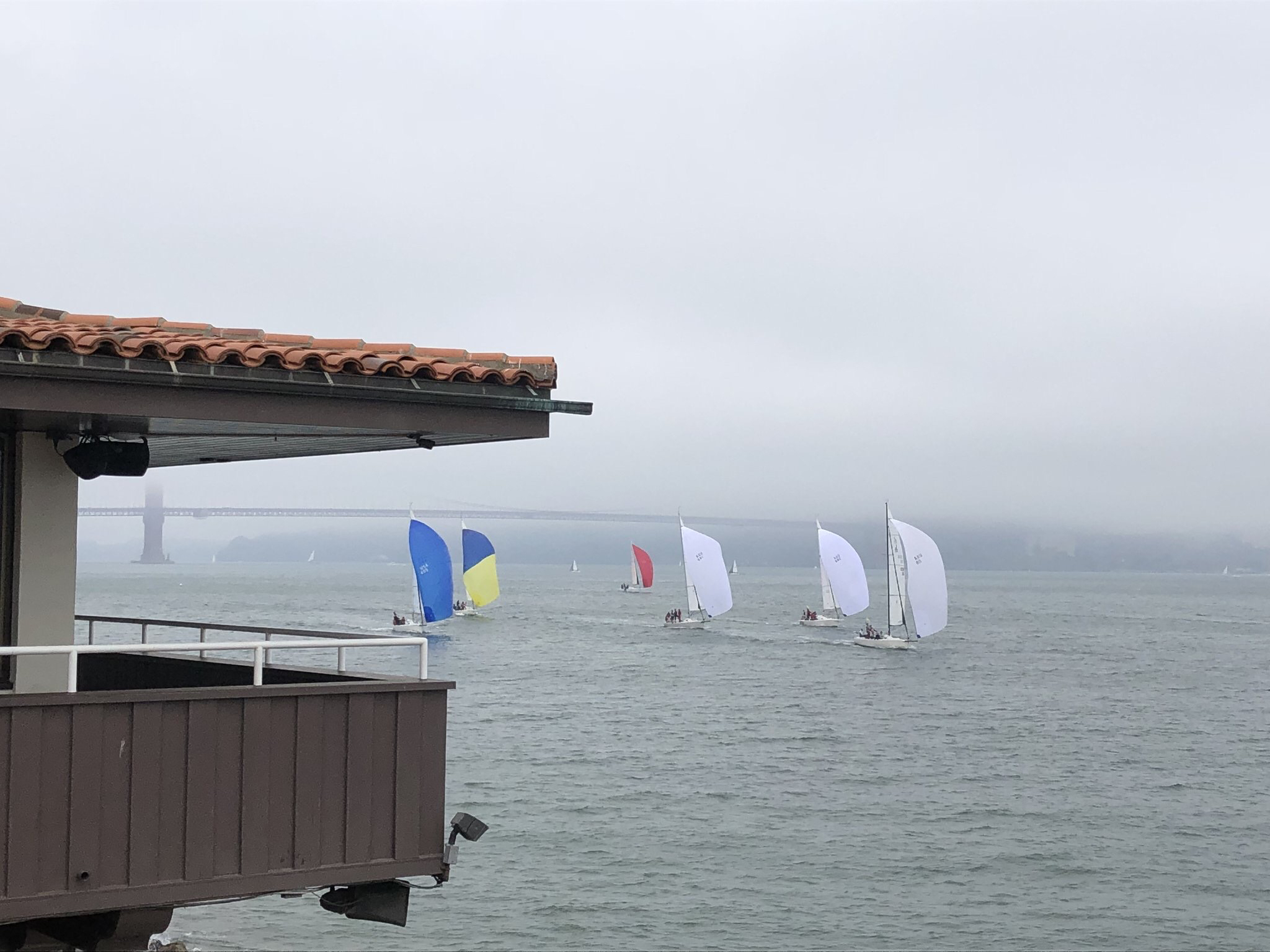 Regatta report by Halsey Richartz, Team Arbitrage 116
The 2018 Phyllis Kleinman Swiftsure got off to a slow postponed start as the start for Class A in Race 1 manifested a massive starboard end advantage requiring a total reset of the starting line delaying all other classes one hour. Uncharacteristically, modified windward leewards were sailed throughout the weekend by the J/105 fleet. This made for exciting short track final beats in a number of races with close finishes; too close for some. With dying ebb outside under the gate and late ebb turning to early flood on the city front, the pack could reliably be found on the middle/right side of the course all weekend in all but the final race of day 1. There was no shortage of love for the boat start as a result where the game was to get on port as soon as possible. Adding to the fun were starboard windward mark roundings on Saturday which made for button hook turns and port boats with kites setting directly into the starboard layline train. Wind ranged from 10-20+ knots with strong breeze down by the start and middle section of the beat dying to low teens and sometimes lower on the approach to the weather mark at Blackaller. A persistent pressure line just above the windward layline with a dead zone just beneath made lane management critical as crews decided whether they were just far enough over-stood to stay in the max pressure all the way into the weather mark. Large gains were made by those who called thin laylines and sailed less distance leading back to the left at the top. The play downwind seemingly all weekend was to get out into the pressure under the gate and ride it downwind. In all but the last race the outside paid dividends. Day 1 left Ne*Ne in first by three. Blackhawk trailed by two and Arbitrage and Akula were tied three back with delta to the pack.
Sunday brought initially lighter conditions to start but the breeze quickly ramped up seeing a gust as high as 25 knots in the first wave of the build. Port windward mark roundings made the top marks more orderly but changed little of the strategy downwind other than making a quick gybe the move. Maverick was the star of the day on Sunday crushing both starts at the port end and getting launched early. The top group was much more dispersed throughout the fleet on day two resulting in hyper fluid standings. The breeze was slightly left of that on Saturday giving the pin end greater leverage if you could flip over to port quickly. Humbled for much of race one on Sunday, Arbitrage found good water and elusive pressure on the final run of the race to scrape back some much needed places going into the gate. Just shy of the finish, Blackhawk let Arbitrage duck on port and they were able to nip Blackhawk at the finish line which would prove costly in the end. Going into the final race Ne*Ne was comfortably ahead on points but was boxed out at the unfavored boat end and found themselves deep in the fleet which proved costly to their final race result but clawed back just enough to tie with Blackhawk who took a bullet to cap the weekend. Resilience and an ability to, if necessary, come back from deep in the fleet proved the winning edge for Ne*Ne. They were able to dig back just enough in the final race to stymy the rally by Blackhawk and Maverick. Uncharacteristically no bay tour races were sailed leaving the long distance fun for next month.mIn the end, Ne*Ne and Blackhawk tied for the win with 16pts with Ne*Ne edging Blackhawk on firsts in the tie breaker. Arbitrage came third with 19pts with Maverick hot on their heels with 20pts one point back after a stellar Sunday 1-2. A thrilling end to the last tune up event before the ~30 entrant J/105 fleet takes the line at next months’ Big Boat Series.
Results Link: https://yachtscoring.com/event_results_cumulative.cfm?eID=5940
Fleet #1 AdminNe*Ne Holds Off Blackhawk in Dramatic Tiebreaker08.28.2018