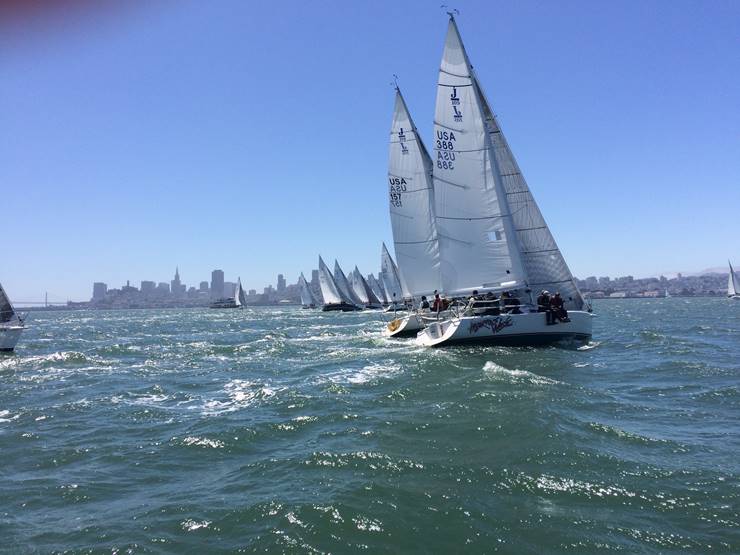 A regatta report by the winning team. (Also, check out this great article at norcalsailing.com.)

SF Bay whipped up a significant flood tide and fearsome 20-27 kt winds to make for a challenging weekend of windward-leeward racing for the 19 J/105s that made it out to the western face of Alcatraz for the Sausalito YC J/105 Invitational, July 23-24, 2016. Unlike racing anywhere in the country, where you need to sail upwind both legs, time the oscillations of the shifts, and take into account a progressive veer or backing of the wind based on forecasts, here it was a case of advance planning. Before leaving home, skipper Bruce Stone reviewed the Sailtactics.com wind and tide forecast with his team on Arbitrage and announced, “We’re starting at the pin and banging the shore for tide relief upwind, and then jibing out to the bigger flood downwind.”

Well, of course it doesn’t perfectly work like that! We grapple with competitors for solid execution, and sometimes we pursue too much of a good thing. Arbitrage nailed the pin end of the line on the first two starts and led to the shore, winning both races by large margins. On the third try, as shown in the photo below, with heavy traffic at the pin, Arbitrage was forced to set up too low and failed to make the pin, so had to jibe around and start on port, taking the sterns of the peloton and going in the wrong direction away from current relief. “We’ll get some leverage outside in more pressure – no other option.” Heading into the teeth of the flood, they made little progress up the course while the fleet legged over to the shore. At mark one, Arbitrage was in a solid trailing position… ugh. Good boathandling downwind got them past a handful of boats struggling with the blustery afternoon winds. Taking a chance with the outside, seemingly more upwind leeward gate, then tacking right away toward shore helped gain quite a few lengths to windward and more boats. By the end of the race they finished tenth and were still leading the regatta, albeit by just one point.

Sunday brought the same weather and tide, and Arbitrage brought the same strategy. However, at the first start they once again didn’t make the pin and had to jibe out to start on port. Rinse and repeat, taking plenty of sterns and heading the wrong way. This time perhaps the regatta would be lost. Yet this time after tacking on the hip of the fleet heading toward the City Front, they connected with more pressure and right angle while the leaders had lighter air, getting them back into a fighting position by mark one. Grinding up through the fleet, Arbitrage managed a hard fought 2nd place. So for the last race, Stone finally tried a more conservative start in the middle of the line, and with good position and speed earned a solid third to secure the victory, with a score line of 1, 1, 10, 2, and 3, two points ahead of Steve Kent’s team on Perseverance and six points ahead of Philip Laby’s team on Godot. Stone remarked, “It was really special for the J/105 fleet to have a dedicated race course, with our own water and no delays. Sausalito YC did a great job in arranging this for us and dealing with really tough conditions for setting marks. Hospitality in sunny Sausalito was off the charts, with the Commodore pouring free beers for us and offering sandwiches. We’re looking forward to coming back next year.”